TrainStation is a fun and addictive game where you can build trains, send them to various destinations and build your own train station. Basically, there are two train types: passenger/mail trains and cargo trains.

Cargo trains operate the same way. You dispatch your empty cargo trains to loading docks, load them up and deliver the materials to your station. Visiting the loading docks and loading up your freight cars manually yields extra materials and experience points. Materials unloaded and stored at your station may be used to construct buildings, carry out station upgrades or it can be simply sold if you run out of gold.

Special wagons (including Cabooses) are, as the name implies, somewhat different to the passenger, mail or cargo wagons. Their purpose is to let players haul assorted rolling stock, that don't necessarily fit into the game mechanics, but would be a shame not to have them in the game. Special wagons can be fitted to cargo as well as to passenger or mail trains. Since they don't generate profit or deliver materials, their purpose is to reward the player with extra experience points. Experience point bonus applies to the particular special wagon only, not to the whole train!

You can assemble almost any train of your choice; either single wagon-type train (passenger train, mail train, lumber train, etc.) or a mixed train (passenger/mail trains or lumber/nail trains, etc.). The fundamental rule is that you are not able to mix passenger/mail carriages with cargo wagons in one train setup. Each freight train is restricted to haul 4 material types at once (since more than 4 materials don't fit into our dispatch screen). Special wagons can be attached to both; passenger or cargo train types. Trains consisting solely of Special wagons travel to passenger towns by default.

Steam engines are the basic type of locomotive. That's what every player starts with. A steam engine has no particular bonuses, but they have a high base power, so they don't get completely useless when diesels are unlocked.

Diesel engines are more advanced than steam engines and yield +40% Overall profit. That means you get +40% more materials and XP from freight trains, +40% more profit and XP from passenger trains as well as +40% more XP from special wagons attached to any train type, and make sure to take in mind that a 18 power steam is better than a 12 power diesel, as 12 multiplied by 140% is 16.8, and 18 is greater than 16.8.

Dispatching and managing your trainsEdit

Assembled trains can be either put into service or they can be stored in your depot. Active trains-in-service occupies trains slots while idle trains-in-depot occupy depot slots. You have a limited number of train slots as well as depot slots, so use your capacities wisely. You are able increase the number of train slots and depot slots later throughout the game. Dispatching your trains is simple. After the wagons are emptied, click the locomotive and send the train to a destination of your choice. The longer the route, the higher the yield (but it's not proportional). Every train has to pay tax upon leaving the station. This tax depends entirely on the type of locomotive you use in the particular train setup, and doesn't scale with trip time, meaning that longer trips consume less resources/money but give less resources than many shorter ones, so if you don't have a lot of gold/fuel/U-235, do longer trips, but if you need more resources, do shorter trips.. Steam engines pay tax in gold, diesel engines pay tax in fuel, and electric and maglev trains pay tax in uranium (U-235). The tax represents maintenance and running cost of a particular engine.

The station screen is where the major part of your train fun happens. You dispatch trains, collect profit from returned trains, collect mail or build various buildings and enhancements around your station, everything is in this main screen.

The station itself consists of two important parts: the street is where all buildings are built and the rail is where your trains arrive, stop and leave the station. You begin with one rail and one street and can upgrade to more rails and streets later on.

All the useful information about your TrainStation is located in the upper part of the station screen: there you can find your passenger and mail count, passenger income, the current gold and gem amounts as well as your current level. You also access other important screens like Trains Overview, Materials Overview, Gift Box, Achievements and the Shop from the station screen.

TrainStation camera controls are also easy to use as well: simply click and drag to move around or rotate the view, in addition scrolling the mouse-wheel or clicking the zoom buttons will zoom your view.

As soon as you start thinking of building more and better trains, acquiring more wagons, building fancier buildings, or even jazzing up your station with some exciting decorations for your station, you should visit the shop. The shop itself is easily accessible from your main station screen and is clearly organized into sections:

Locomotives - Select from a large selection of locomotives for your trains. From the least expensive engines to the latest, most powerful and most profitable models.

Cargo wagons - An extensive variety of cargo wagons for your freight fleet.

Buildings - Buildings add glamour and style to your unique station and also serve to attract more passengers for you to transport. Each building has a different passenger income ratio.

Decorations - The purpose of decorations is to make your station look pretty, and they give a nice amount of experience points.

Station extensions and themes - This is where you upgrade your station. Add build lines to your station to construct more buildings, add rails to accept and dispatch multiple trains at once or proceed into new themes to discover new trains, buildings and much more.

The "Trains" screen gives you a brief overview of your trains. Every train has its own status bar, where you can see what is happening at the moment.

You are able to speed up your trains any time. This will instantly return your train back to your station. Speeding up trains gives you full profit upon returning, but costs Gems. You are also able to cancel your trains during the first half of their journey. Canceling trains is free but returns the train with zero profit! Also note that canceling trains that are traveling less than 10 minutes makes them return in remainder of 10minutes (e.g: train that is canceled in 2minutes returns within 8 minutes). Canceled trains that have traveled longer than 10 minutes return instantly.

This is basically your train depot, where you buy, sell, set up new trains and rebuild old ones. The bottom line of the screen represents your storage of wagons and locomotives. The upper line is the depot's train assembly rail, where you simply drag and drop your desired train setup from storage. If you don't have any locomotives or wagons in storage, access the shop by clicking the "Shop" button and buy some, autoselecting the tab you were on. As soon as you are done making your new train or modifying an old one, you may send it to the station or you can just leave it in your depot for later editing.

Accessing Construction Yard is possible in two different ways. Either via the "New Train" button in your "Trains" screen (you need a free train slot to do so), or via "Edit Train" button in "Train Management" screen (the screen, where you are choosing the train destinations). There will be also a direct access option soon...

Having your goods under control is very important. Material overview shows you your current materials in stock. Every time you unload any of your cargo trains in your station, all of the materials are immediately taken to your warehouse. Then your materials are either used for building structures or sold to gain some immediate gold.

Museum represents the player's personal collection of locomotives. It holds a record about every locomotive that the player has ever collected.

You are also able, when you visit your neighbours' station, to see their museums statistics.
Maybe with a future update you are able to see their collection. The links to the seperate groups you can click, but with no response. 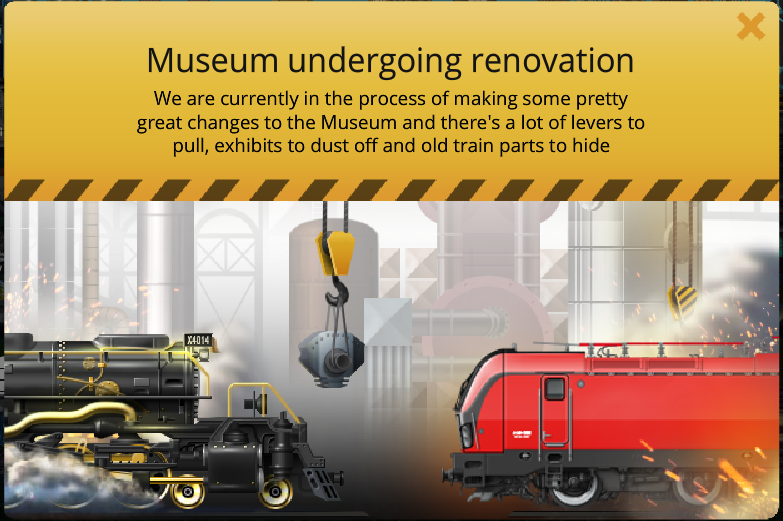