Friends are other players in the game you can trade gold

with. Although the game never requires any player to have friends, they can help make the game more engaging in several ways. Friends can be a big part of TrainStation's gameplay, including things like exchanging Gifts and International Trains, and also completing the Social Achievements.

Notice: This feature is unlocked at level 11 to players.

The Friends List can be opened by clicking on the Friends button within the game (see image above). 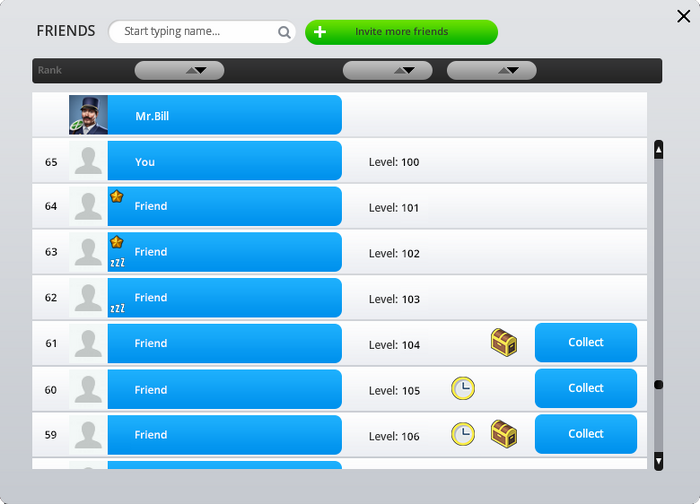 Players can search for Friends by name using the Search Box.

By default, the Friends List is sorted by Rank in descending order, and centered on the player; lowest level Friends at the top of the list, and highest level Friends at the bottom. The player can also sort the list by using the three grey sorting buttons. Sort options are by Name, Level, and any available Collectibles (Clocks/Chests).

Every player starts with Mr. Bill as their only Friend. If a player connects the game to Facebook, Google+, or via the Pixel Federation Portal, this allows for more Friends.

When logging in through Facebook/Google+, any Friends also playing TS via those platforms will automatically show up in the game. When playing with a Portal account, you can add Friends using the green 'Invite more friends' button in-game (see above) or via the Portal's Player Profile page. When connecting with your Facebook account, the player can play via the Portal or play directly on Facebook. However, some (high level) items are only available when logging in through the Portal. 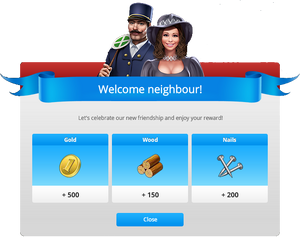 Visiting Friends is as easy on clicking on their portrait/name in the Friends list. This takes the player to a view of their Main Station.

Notice: Players will be able to visit Friends station once they reach level 12.

Newly added Friends will have a gold star

next to their name. Visiting them the first time offers a small gold and material reward and helps complete the Social Spirit achievement.

Sending gifts is part of being a good friend. Gifts can be sent to each Friend at least once per day and to Mr. Bill too. One of the Social Achievements requires the player to send gifts to Friends. Having more Friends will help complete this set of achievements more quickly.

Note: Sending gifts do not use the player's gold or material, it is sent from Mr. Bill's never-ending storage. Also, players will be able to send gifts to their friends, once they reach level 11.

If the player is a good Friend and sends gifts frequently, their Friends will likely return the favor and send gifts to you. This not only awards free resources and interesting game items (such as Moose Transport), but it also helps earn the Bounty Hunter achievement.

(to send materials), or Special Wagons

(to send XP) will help those Friends in their game progress. And, they may send trains full of resources in return. Purchasing the Trainroute Planner extensions will allow the player to send each train to up to 8 recipients at once.

When Friends send their own International Trains, the player can collect gold

. These trains will wait in the player's station for up to 24 hours. There is an IT History button within the Train Manager's International Trains tab that will show the player details on the last 30 IT trains received from Friends.

Every 23.5 hours, Express Trains appear at randomly selected Friend's stations (the 23.5-hour timer is reset upon collecting all trains from Mr. Bill.) These Express Trains can award gold, materials, XP. When available, a Clock icon will appear on the Friend's line with a 'Collect' button. Both the Clock and Chest icon can appear at the same Friend. If the player uses the 'Collect' button, the total rewards of those Friend's trains are displayed. An example of this (at level 674) is below: 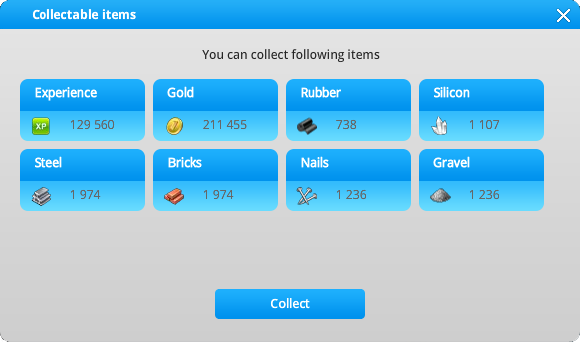 If any of the Friend trains are new to the player's Museum, a color-coded box is shown with the number of newly acquired trains.

If the player chooses to visit these Friend's stations to collect the trains, the One-Click-Unload extension makes this much easier and faster.

Every few hours, the player can collect a Chest from up to five Friend stations. When a Chest is available, a Chest icon will appear on the Friend's line with a 'Collect' button. The Enhanced Chests extension increases these rewards by 50%.

These Chests typically award a large amount of Mail

and some Resources. Since the player has delivered nearly 11,000,000 pieces of mail for the Postmaster achievement, having many Friends will make quick work of it. Both the Clock and Chest icon can appear at the same Friend. 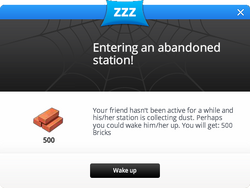 If a Friend does not play for 2-3 days, a small white ZZZ icon will appear next to the Friend's name. These stations are considered abandoned. Upon visiting an abandoned station, the player "wakes the Friend up" which awards the player 500 of random material. This material will be sent to your gift box from Mr. Bill. NOTE: There is a known bug in the game where some active Friends still show up with ZZZ icons.

Removing Friends can be difficult. Friends added via the Portal can be removed easily from the Portal's Profile Page (they can be blocked from sending invites as well). However, Friends gained via Facebook/Google+ are automatic as long as they have their game attached to their profile. If they remove their game or are no longer the player's friends, they will usually disappear. This has proven to not always be effective, and a ticket to Support may be required.

With the 11 Jun 2018 Game Update PF has added 'Refresh Friends Button' in the portal only at the moment. This will help the player to force the sync to refresh and update their list of a player been added or/and removed from their neighbor list.
At 12 Jul 2018 the 'Refresh Friends Button' was also introduced to the mobile version 1.0.48.49. You will find it in the 'Settings' in the App.

This section contains any significant changes to the way the Friends function in the game:

Community content is available under CC-BY-SA unless otherwise noted.
Advertisement